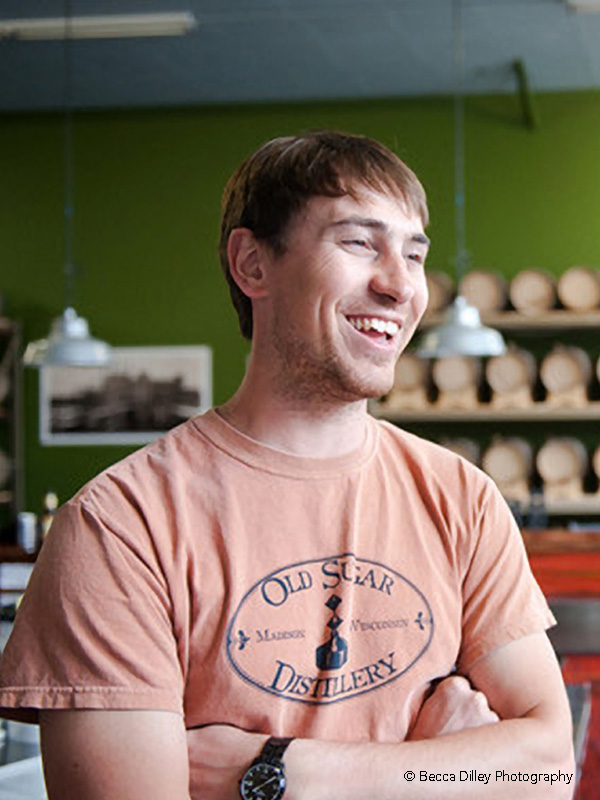 Local distillers love to concentrate on their craft. For the last of our Meet the Maker interviews, we sat down with Nathan Greenawalt at his Old Sugar Distillery. Some are surprised to learn that Nathan’s spirited journey began before bourbon. He graduated with an Economics degree from the University of Wisconsin-Madison, but found his maker niche with a little help from state lawmakers. Now he’s got a growing fan base enjoying his bourbon, brandies and more—all made from local ingredients.

How did you get started?
Nathan Greenawalt: My original intent was to produce for wholesalers… but the laws changed in Wisconsin and allowed for a tasting room. Once that happened, I thought it was too good an opportunity to pass up.

Has Old Sugar Distillery been everything you expected?
NG: It’s been a lot more than what I anticipated (laughs). I didn’t get into this business to run a bar. That wasn’t my plan, but the tasting room just became very popular and has really been the more successful side of the business, so you kind of have to roll with it.

What makes your spirits different?
NG: I try to make really unique products. It’s not so exciting to make the same thing that everyone else is making. Our honey liqueur is dry and lightly sweetened. It’s strong. It’s 80 proof and there’s nothing else like it. There are some (at) 70 proof that have four times as much sugar as ours does.

Character won’t be lost at Old Sugar. The distillery’s name itself was influenced by the sugar-based products they make and a Madison beet sugar factory from the early 1900’s. Nathan says it takes about 20 pounds of grapes to make just one bottle of brandy and three pounds of concentrated sorghum syrup to make one bottle of whiskey. Those ingredients are all locally grown and Nathan continues to use them in new batches. Keep your eye out for six new small batch whiskeys in the coming months. It seems the only part of Nathan that stands still, is his still itself.